7th Bishop of the Diocese of Wilcannia-Forbes

Bishop Columba Macbeth-Green was born in 1968 in Forbes NSW, the son of Paul Green and Lorna nee Macbeth. Raised on a farm, he was educated at St Laurence’s Primary School and Red Bend Catholic College in Forbes. Upon leaving school, he taught music and joined the Australian Army Reserve as a Piper.

After spending two years with Conventual Franciscans, he joined the Order of St. Paul the First Hermit (Pauline Fathers) in 1990, and studied for the Priesthood at Vianney College in Wagga Wagga. He made his Solemn Profession in the Order in 1996 and was ordained a priest the following year on 22nd November 1997.

The Pauline Fathers, founded in 1215 in Hungary, are a semi-contemplative order who observe the Rule of St. Augustine. They are based in Poland and are custodians of the Shrine of Our Lady of Czestochowa.

At the time of his appointment as Bishop, he was the Provincial Vicar of the Pauline Fathers for Australia and Rector of the Shrine of Mary, Help of Christians at Marian Valley, Canungra, Queensland, where he served from 2006 to 2014.

The Bishop’s appointment by Pope Francis was announced on 12 April 2014. 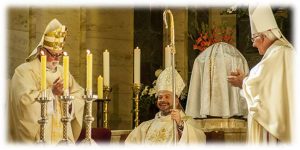